I Married A Witch features Veronica Lake as a playful witch (Jennifer) determined to make the uptight Wallace Wooley (Fredric March) fall in love with her before he carries through on wedding plans with his snobby fiancé (Susan Hayward).

While the film credits Thorne Smith's The Passionate Witch as the source material, it bears scant resemblance to the book.

Screenwriters Robert Pirosch, Marc Connelly, and Dalton Trumbo felt the novel made Jennifer too dark, which is something I have always felt about the novel as well.  Based on the research I've done thus far, Thorne never got very far in the actual writing of the book before he died. Norman Matson completed the novel, working from the notes and outline Thorne had created.

I personally believe there are plenty of Thorne Smith-like elements in I Married A Witch that are usually not acknowledged in most reviews.  Take Jennifer's father, Daniel (Cecil Kellaway) for example.

He is not in the book but he embodies the characteristics one might expect in a Thorne Smith novel; a warlock who gets so drunk he forgets the words to the spells he could easily use to escape jail or turn his jailer into a frog.

If you haven't seen this movie in awhile, you should really do yourself a favor and pick up the wonderful DVD edition Criterion released.  It's by far the best copy you can add to your home video collection today.  And it's perfect for watching with the family at Halloween.

You can also watch this movie trailer on the Thorne Smith 1 YouTube channel at:

I Married A Witch movie trailer 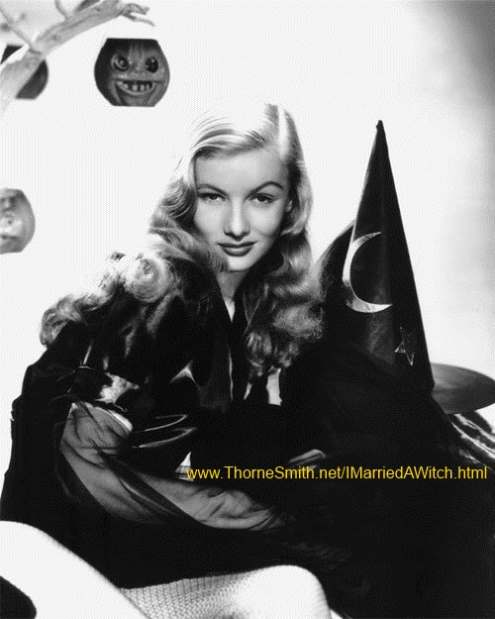 More Thoughts on I Married A Witch

Here are more reviews for your enjoyment.

Criterion, the wonderful folks who have released the new digitally restored DVD of I Married A Witch, have posted a terrific review of the movie written by Guy Maddin. You can read that entire review by clicking here => Guy Maddin essay

You can also read the outstanding article below by Jeff Stafford.

I Married A Witch - Jeff Stafford

Want to know what great acting is? It's when two actors who loathe each other in real life have to perform a convincing love scene on film. And watching I Married a Witch (1942) starring Veronica Lake and Fredric March, you'd never guess that this romantic duo feuded constantly during the making of the film. On the surface, I Married a Witch is a tale of the supernatural, played for laughs, and uses its premise to poke fun at American politics, the institution of marriage, and New England's puritan ancestors.

Opening with a double witch burning sanctioned by the Wooley clan in 1690, the story proceeds swiftly through the centuries up to 1942 where Wallace Wooley (Fredric March), a political candidate for governor, inherits the family curse when lightning releases the two witches from their imprisonment in an ancient tree. Jennifer (Veronica Lake), the female witch, takes the form of a curvaceous blonde with an eye toward wrecking Wooley's impending marriage while her father, Daniel (Cecil Kellaway), creates all sorts of mischief when he isn't indulging his fondness for booze.

Rene Clair, the acclaimed French director of such comic masterpieces as The Italian Straw Hat (1927) and A Nous La Liberte (1931), had just completed his first American film - The Flame of New Orleans (1941) - for Universal Studios but was not offered a second film due to the poor commercial reception of the first.

According to Clair in an interview with R.C. Dale for Film Quarterly, "My agent, Myron Selznick, had sent me a book, The Passionate Witch. I read it and thought I could do something with it. I met Preston (Sturges), who eventually became a good friend of mine - he spoke French as well as I do - and who was then the leading director at Paramount. We talked over the project and he agreed to produce it for me. Paramount had been trying to find something right for Veronica Lake, who had been receiving lots of publicity partly because of her beautiful hair. They didn't want an ordinary role for her, and Preston convinced them that I Married a Witch was just what they needed. That's what did it: Veronica Lake got me that job; she was a lot more important to Paramount than I was, believe me."

Almost from the beginning of production, there was friction between the two leads. One thing that couldn't have helped matters was the fact that prior to meeting his co-star, Fredric March had reportedly said Lake was "a brainless little blonde sexpot, void of any acting ability," a comment that made its way back to her.

In retaliation, Lake called March a "pompous poseur" and their adversarial working relationship proceeded from there. Lake became fond of playing pranks on March; in scenes like the hotel fire where March had to pick her up and carry her, the actress placed a forty pound weight under her dress which affected March's physical stamina when several takes were required of the scene.

In her autobiography, Veronica, she relates another incident involving a two shot of the couple from the waist up: "He was standing directly in front of the chair. I carefully brought my foot up between his legs. And I moved my foot up and down, each upward movement pushing it ever so slightly into his groin. Pro that he is, he never showed his predicament during the scene. But it wasn't easy for him, and I delighted in knowing what was going through his mind. Naturally, when the scene was over, he laced into me. I just smiled."

In addition to his antagonistic leads, Clair had to contend with their dissimilar acting styles; Lake was usually best on her first take while March's performance improved with each retake. In Fredric March: Craftsman First, Star Second by Deborah C. Peterson, Clair revealed that "the discrepancy between the two actors' best takes on any given shot led me to devise all sorts of tricks, including actually shooting Veronica when she thought we were still rehearsing."

Clair also ran into trouble over Lake's first appearance in the film: "The censors protested because when the witch comes through the smoke, she is nude. I told them that the audience would see no more of Veronica Lake than if she were wearing an evening gown. We see only her shoulder; the rest of her is in smoke. They replied that the audience might not see her, but March would!"

In the grand tradition of The Ghost Goes West (1935) and Topper (1937), I Married a Witch makes a welcome addition to the somewhat specialized genre of comic supernatural fantasies and would later serve as the inspiration for the long-running TV series, Bewitched (1964-1972).

In addition to the witty script by Robert Pirosh, Marc Connelly, and Dalton Trumbo and the spirited performances of the entire cast, the film benefits greatly from a non-stop barrage of sight gags that run the gamut from hex-induced hurricanes to spirits imprisoned in bottles to taxicabs that float in the air.

Note: I Married A Witch article reprinted with permission of Turner Classic Movies.

Return from I Married A Witch to Thorne Smith Movies